Why are Large Caps still Increasing?

Like stated in the first paragraph, these screens are incredibly simple. For the new high screener we are just looking for all companies whose previous close was greater than the highest close within the past 251 days.

The results from here were actually fairly surprising. I didn’t expect to see many companies that I recognized, but a lot of these companies show up across multiple different screens.

Let’s see how it performs over the past 20 years.

That’s pretty fantastic – crushing the market over the past twenty years. However, I see a few things that are semi-worrying.

The first thing I notice is in the “backtest by time tab” which allows us to see how well a strategy performs year after year. In this strategy’s backtest by time we see that a lot of the returns are reliant on one very early win that isn’t likely to replicate itself anytime in the near future. The strategy also doesn’t really outperform the S&P by any real value in the past few years, meaning that this strategy may very well be dead.

Putting that aside, we need to eliminate the outlier year of 200 by simply adding not year=2000 into our editor.

How do the results change? 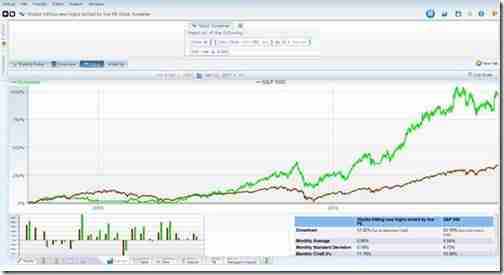 The strategy still outperforms the market without the year 2000, though not nearly by as much. This added with the moderatlely high volatility in the stock chart and the lack of outperformance, makes me question whether or not “buy high and sell higher” is the right way to go.

Let’s try the other end now. What happens if we purchase a company at its 52-week low? First, let’s build that screen.

Much like the previous example, this screen is incredibly simple. If you can’t notice, it is actually the exact same screen flipped.

Here are the results. Much like before, I’m incredibly surprised that I actually recognize a few big names on this list. Each of these companies just hit their lowest point in a year today, and by my possibly flawed logic, you should be able to jump into one of these positions and wait for it to turn around “Buying low and selling high”.

And that’s not happening. This screen actually did worse than the buy high, sell higher screen. The standard deviation is massive, and this screen’s returns are still heavily reliant on one year – 2003.

Let’s eliminate the year 2003 from this data set and see how well this strategy does. 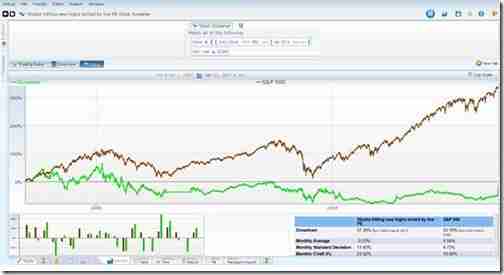 It of course does even worse than before! But hey, let’s look on the bright side, we may have the beginnings of a short strategy.

Though this was a really interesting test, I personally don’t feel like I got the information I wanted. However, at the very least, we can come to the conclusion that there really isn’t an advantage to purchasing a stock based on the 52-week high or low. Stocks at the lowest end may very well be a wonderful red flag indicator, but past that the real world applications seem bleak.