When Your Screener “Blows up”

Exxon Mobil: Does a prolonged earnings slide mean anything?

Companies’ stock prices generally go up when earnings do.  So, when faced with a stalwart household name whose earnings have been steadily going down for two years, what should we do?   Consider Exxon Mobil.  Since it has some history (Rockerfeller founded Standard Oil in 1870), we can take the long view.  Here I present 20 years of price history.

Since 2007 (halfway across the chart) XOM has gone up about 5% annually, while the S&P 500 went up almost 10%.  What’s more, XOM had the same volatility as the general market .  That means investors got the same risk, but half the reward, even including the dividends.  What happened? Is it was worth holding on to XOM?  It’s time to look at the fundamentals, and see if there are any clues. 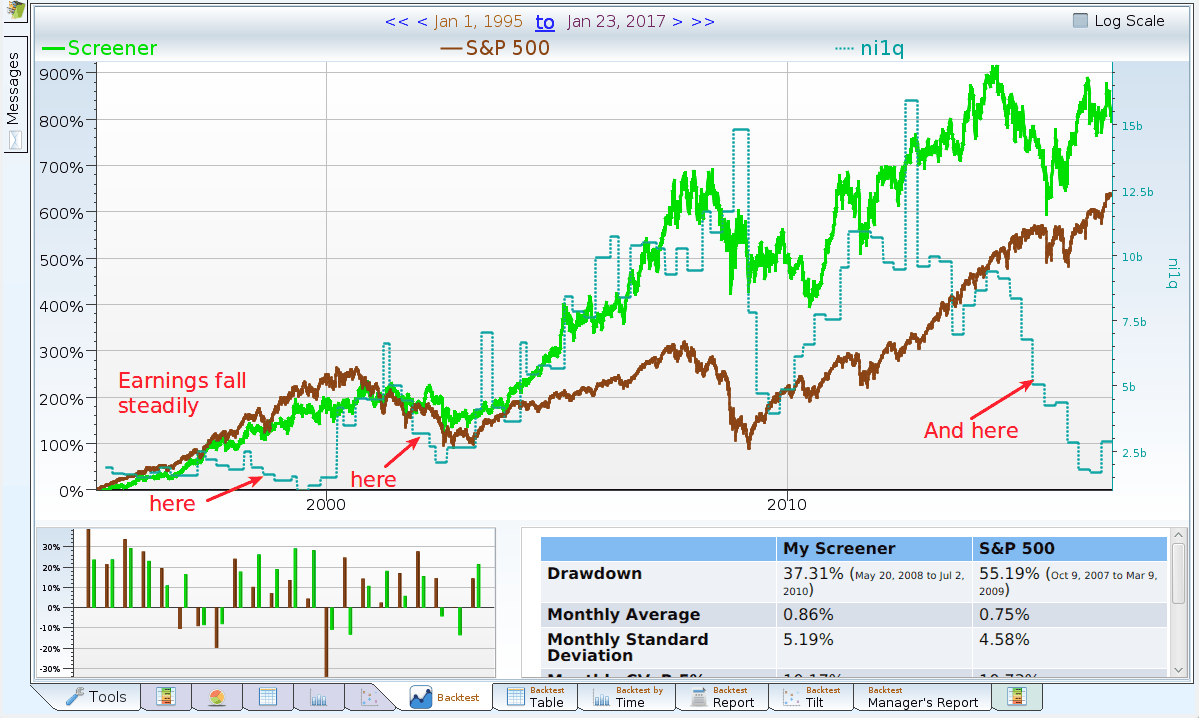 Figure 2 20 years of XOM with earnings

Looking at earnings (unadjusted Net Income), there’s an eerie correspondence between earnings and future stock price appreciation.  It certainly is not perfect, but it is there.  Perhaps it is splitting hairs to notice that in the two earnings slides that preceded poor stock performance, the slides were fairly deep.  Alternatively, one could argue that in the ’90s, earnings didn’t matter, and that shows in the stock price.  Either way, it seems dangerous to try to reach for a conclusion with only three data points.

Big data to the rescue 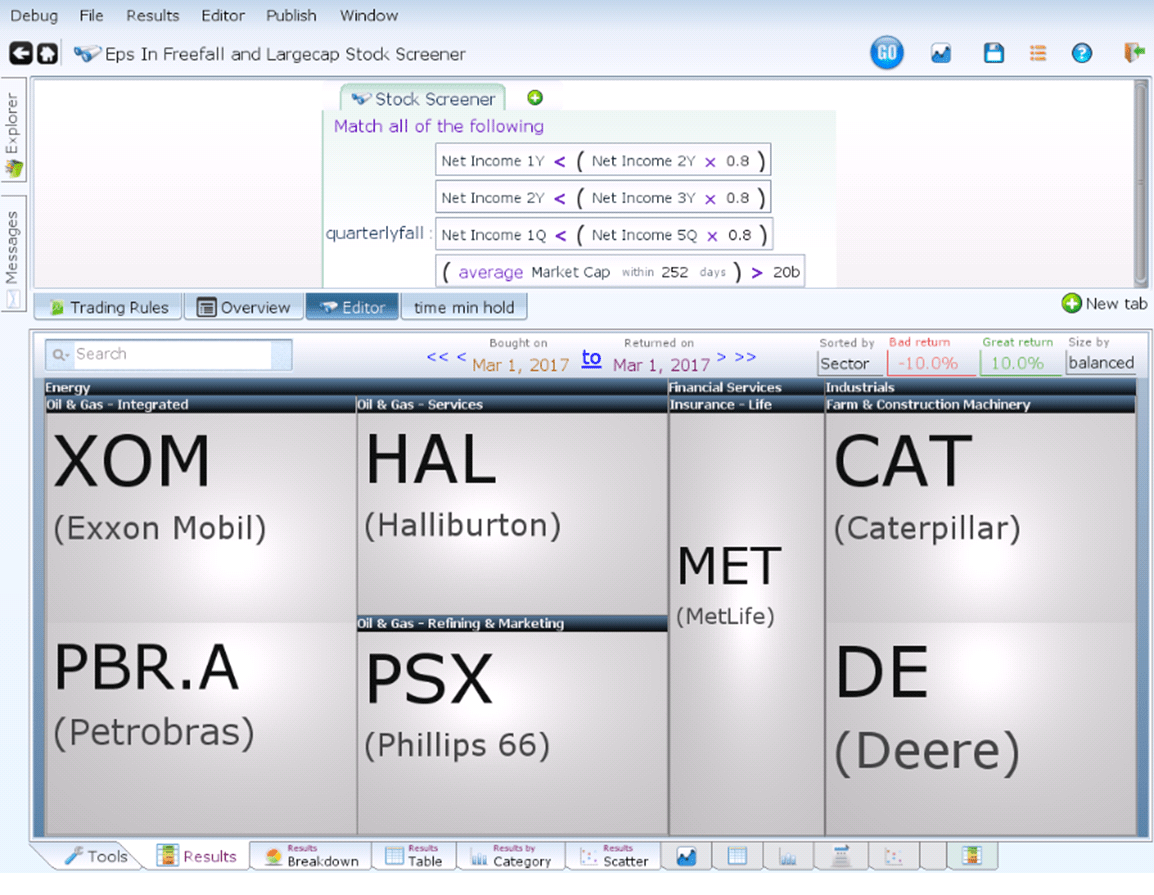 OK, so there are four companies in the oil patch, and three others. What does this mean, exactly? The only way to find out is to go back into the past, and find companies that matched these criteria in the past, and see how they did. Imagine there was a mutual fund whose job it was to invest in these large companies that are in the middle of an earnings slide. Every quarter, it invested in the current match, held them for one quarter, and sold them off. Then, it is time to buy the new earnings sliders, and do it all again next quarter. The same company may match for multiple quarters. One obvious question is “How would this mutual fund do?” If it did poorly, perhaps we should be wary of these companies. The chart below depicts what investors in this mythical mutual fund might experience. We use a log scale chart, so it’s easier to see what’s going on. The brown line is the S&P 500, while the green line is our earnings slide mutual fund.

Investors in this fund who invested at the “peak” in 1998, and held through to the trough got less than two cents back for every dollar put in. Investors who started at the beginning, and held on through the end did better – they lost “only” 92% of their money. The year by year view of performance tells a similar story: some years this mutual fund made money, or even outperformed. Similarly, some stocks made money, or even outperformed. On average, however, this did not seem to be a good strategy.

What does this prove? This only shows what happened to investors who bought these companies and held them while they slid, and sold them the quarter after they stopped sliding. Who really does that? It is time to run a few different (hopefully more realistic) scenarios. Perhaps, if one holds these companies long enough, they might be good investments. The table below varies the minimum holding times of these earnings sliders, and how often new companies are added to the portfolio.

Faith Face plant — explain rebalance and timing issues!!!
Look at the green line (our rebalancing portfolio of earnings sliders), above, as it falls from 0% change to almost nothing, going down 10% annually.  The brown line (the S&P 500) goes up, while the these companies fall.  I’m not implying that XOM will lose 10% annually, as the companies that match that screen do.  But it does throw up a red flag, as this looks like a promising short screen.  That’s not where I want my holdings to end up!  Correlation to X month performance in the future…
Does Exxon really fit this mold.  Certainly.  It’s earnings have gone down 40+% year over year for the last two years, and it has not had a market cap as small as $20 billion at any point on this chart.

What about money losers?

An important hair to split here is that Exxon Mobil has not lost any money, and our screen includes companies that go from profit to loss, or from loss to bigger loss.  These terrible companies could be besmirching the reputation of our stalwart.  It’s time to find out. 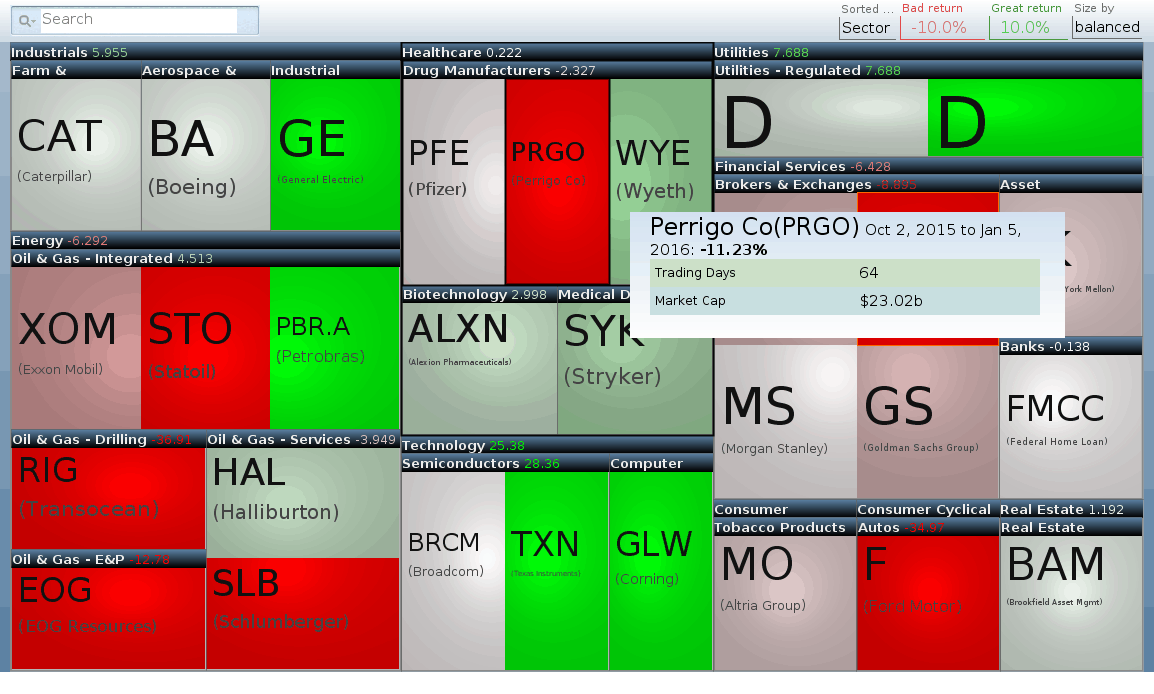 The portfolio lost “only” 2% per year, making money in 6 out of the 13 years, and losing money the other 7.  So, yes, the companies that lost money were even worse.  Yes, they besmirched the reputation of our stalwart, and others.  But, these stalwarts were no prize.

What to do from here?

It’s clear that buying companies like this is not a good idea.  However, there’s no hurry to instantly sell them (unlike the money losers that fit this screen).  You could write calls on your holding every month, and collect the dividend.  If your stock got called away, it would be no great loss.  Since these shares are liquid, well known household names, you can expect to be able to write options.  However, you should make sure you get at least a decent yield from options, as you are still taking a risk:   RIG lost 35% of its value in 6 months.