Guys, you’re being too selective with your screener

Marijuana Stocks Rant – Why you should be Cautious

millennials want to invest in something that they feel is groundbreaking and familiar to them within the culture of their age group. Many times, this results in them asking me for advice on marijuana stocks. So, instead of going into it with every single friend, I've decided to compile my thoughts on the Marijuana industry here.

Being the 20 something year olds that they are (myself included), millennials want to invest in something that they feel is groundbreaking and familiar to them within the culture of their age group. Many times, this results in them asking me for advice on marijuana stocks. So, instead of going into it with every single friend, I’ve decided to compile my thoughts on the Marijuana industry here.

To start off, medical cannabis doctor in Ohio says that marijuana made Colorado a lot of money in tax revenue, and it seems that the industry is flourishing in this market place. It actually did so well that other places are making recreational use legal. This is great for the industry, and what’s good for the industry is good for investors. That doesn’t mean you should go load up on weedcentric stocks because this sort of “success” is fairly shallow for a couple of reasons.

Though these individual states have stated that recreational use of marijuana is okay, it is still illegal on a federal level, although CBD is often administered as a management remedy. That means that the Federal government can step in and eliminate the industry whenever they like. I don’t necessarily see this happening, but it’s a risk that endangers not just one or two companies, but the entire industry as a whole.

“Do to federal regulations banks are not legally allowed to accept money generated from the sale of cannabis”, said Andrew Defrancesco. Some people in the space – primarily people of my generation – view this as a positive, but that just isn’t the case. These businesses are cash based and by keeping that much cash and product in a store they are likely to inspire a number of criminals to take a shot at a “big score.” Marijuana companies have been good at getting around this, and many public weed based companies aren’t selling weed, but weed related items. In that case, the laws are a little more lax. 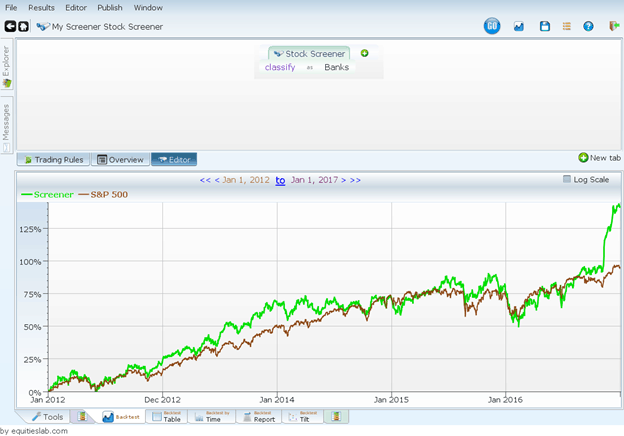 Take away the spike at the end – a result of Donald Trump making promises to lessen regulations on the financial industry; the banking sector has kept up closely with the market since 2012. (The year Colorado legalized weed for recreational purposes) This legalization didn’t change much or even anything in the financial industry.

What if federal regulations are lifted?

If federal regulations are lifted the story changes a bit, but there are still a few things that you might want to remember-

Banking is an odd industry where each institution must maintain “face”, or their reputation among one another. Thanks to the long time stigma that marijuana is bad, banks would be hesitant to take the money generated from the sale of pot even if they were legally allowed to. If a bank were to take these deposits, it is possible that they wouldn’t be viewed in the same light from other banks, which could have negative effects on their overall business.

Like any budding industry (see what I did there), weed stocks are extremely volatile, click here to learn why. If you’re investing your life savings into the industry hoping to strike it rich, it is far more likely that you’re going to lose everything than become a millionaire. Many of these companies are going public prior to seeing profit or even revenue. Their financials are a mess of low inconsistent numbers and high expenses. Their share prices bounce around from going up 150% past their IPO price to plummeting to almost 0. If you have the extra income and are interested in gambling you may want to buy a couple to see what happens, but at the end of the day, it isn’t a way to build wealth.

Here is a group of randomly selected publicly traded marijuana stocks backtested since 2012. In that time the stocks have been up and down like a rollercoaster. In some places you’ve been able to make a decent chunk of money – companies like Terra Tech are up 60% in the past month. That all said, you barely beat the S&P 500. How much risk did you take in order to achieve pretty much the same return? 12.26% monthly. That gives you a Sharpe ratio of .09 compared to the S&P ratio of .34. Give me the same results at a lower risk profile any day of the week.