Over the past few weeks’ major indices have continued to hit new all-time highs, it seems like almost every industry is performing well. However, it’s important not to get lost in all the commotion and news surrounding the markets and continue to look for safe investments with “yuge” returns. Under the current administration, investors are anticipating a more pro-business environment complimented by tax cuts and deregulation for certain industries. Since there is a lot of anticipation relying on fiscal policy, it is important not to get ahead of yourself. While the Trump administration is promising a lot of economic growth, many economists beg to differ and argue that we are already close to full natural employment and that there isn’t much room for 3-4% GDP growth. It will be important to keep an eye on the Federal Reserve as well on their monetary policy to make sure the economy doesn’t overheat by continuing to raise interest rates accordingly.

One of the main promises from the current administration is to rebuild the military and expand the military budget by 10% which comes out to around a $54-billion-dollar increase. This heavy bump in military spending will benefit big name government defense & aerospace contractors like United Technologies (UTX), Northrop Grumman (NOC), Boeing, etc. From a look at the chart below, you can see the defense sector hasn’t been known for a high yield in recent times, but that all changed post-election. The Obama administration still spent hundreds of billions on the military, but a $54 Billion increase in spending will definitely boost the defense sector’s earnings. 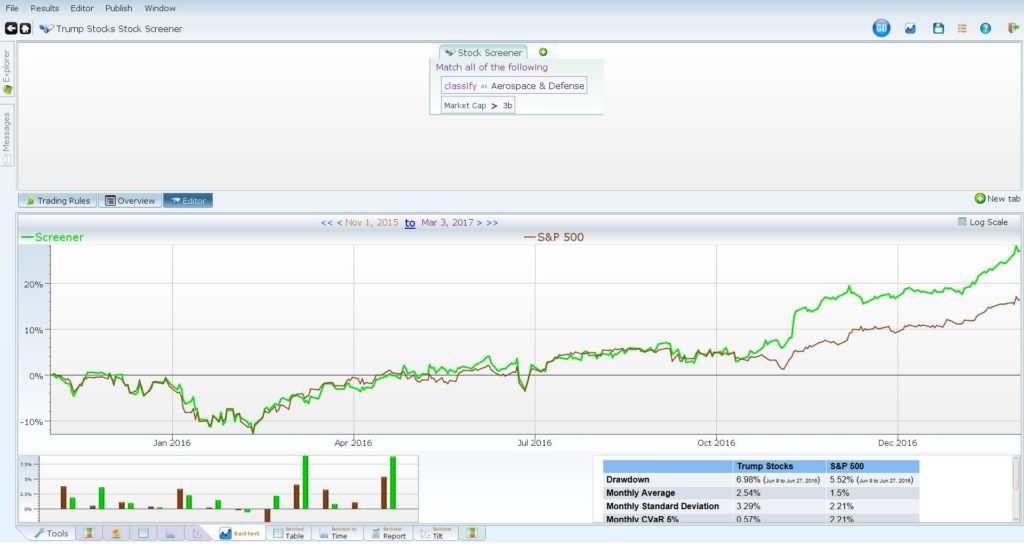 Trump inherited an incredibly healthy economy. The financial services side of the economy has adapted to extremely low interest rates ever since the financial crises, but it looks like the economy is ready for some interest rate hikes to come in the not so distant future. The types of companies that will benefit the most from this will be insurance companies, banks, and credit services. The banking sector as a whole took flight immediately following the election results, posting an industry return of roughly 31% since November 8th. Bank stocks would benefit greatly from rising interest rates as they will be able to collect more money from their loans, as well as fixed income investments. Smaller to mid-cap banks stand to gain the most as Trump has vowed to tweak the Dodd-Frank legislation which was passed following the financial crisis in an effort to stabilize the banking sector. The piece of legislation has been criticized heavily for the higher reserve requirement it puts on banks, making smaller and regional banks much harder to find growth. If the reserve requirement is lifted, along with tax cuts, that would drive profits up and encourage more lending with a healthy economy. As you can see below, banks stocks have already started to move higher on this potential.

Insurance companies would also benefit from rising interest rates under the new administration. Berkshire Hathaway (BRK.A) owns Gieco and rising interest rates would allow Berkshire to collect more on their premiums of their clients, then they invest that money into interest earning accounts which ties right back to bank stocks. Berkshire Hathaway class A stock isn’t all that cheap going at around $263,000 a share, so if you want exposure to their assets then check out their more reasonably priced class B stock (BRK.B). 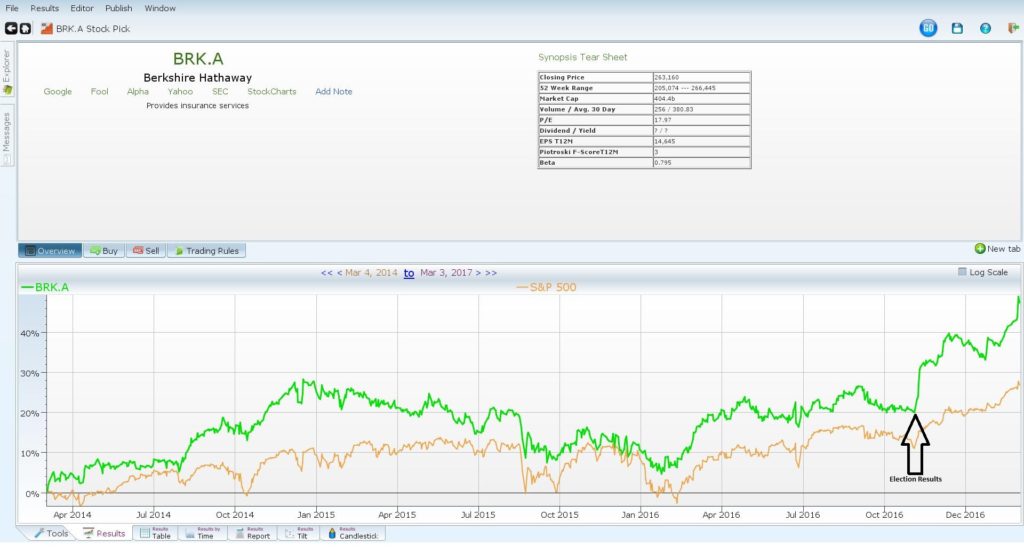 It’s important to remember at this point that these industries are already trading at levels as if it is certain that the speculation that got them to the level they are at will become a reality. This makes for a very fragile market environment. A bad earnings quarter could easily correct these companies which have gotten far ahead of themselves. With a unified Republican government, it is more than likely that a lot of what is being talked about will indeed happen. It will be interesting to see how all the economic policies play out and what sectors may surprise investors.