The Industry Transition of Retail

Death Crosses will Kill your Portfolio

I’m about 1/3 of the way through “The Complete Turtle Trader” by Michael W Covel, and I’m enjoying myself.  His narratives about the people are entertaining, though that’s not why I bought the book.  It does give me color into how technical traders think, though.  It also is nice to hear that simpler is better.  I also like his scientific approach:

As I’m only 1/3 of the way through the book, I haven’t absorbed the money management rules, or the full details of the system.  That said, I thought it was worth testing S1 and S2, with nothing extra to see if either of them work on U.S.  Equities.  The way I see it, they could either work on:

Which Stocks to Test

Which stocks do we want to test these systems on?  We want a reasonable selection of stocks, that is still small enough that this article doesn’t become a book.  So, we pick five stocks, as follows (stocks chosen using Dec 7,2016 data):

Turtle trading’s core (which is all we are going to cover in part I) is all about two systems, that they call S1 and S2.  S1 says that if the stock price is above its 20 day high, and hold it until it breaks below it’s 10 day low.  We’re glossing over details such as first new high versus any new high (though the book seems to indicate any new high will do, to prevent you from standing on the sidelines).  We’re also ignoring the rule that says we should ignore the trend if it made a profit last time.  Finally, we aren’t selling short.  Nevertheless, we need to see how these stocks did under our (simplified) S1.

Simple S1 to the test

Here’s the formula for Simple S1 as I implemented it.

Apparently many stocks are in an uptrend.  But we don’t care about that right now.  We’re just going to focus on our chosen stocks, and see what happened if put our very simple trend following system into practice.  NOTE:  the following charts are in the trading model part of the program.  This means that we get cool shading when we are in and out, that it’s easy to model trading every day, and most importantly, that we ignore dividends.  To me, this seems appropriate for a fast moving trend following strategy.  We can, if desired, do the same thing as part of a one stock backtest (you’ll see that at the end), and dividends will be included.  That said, we certainly are not taking taxes into account, and simulations are always imperfect. 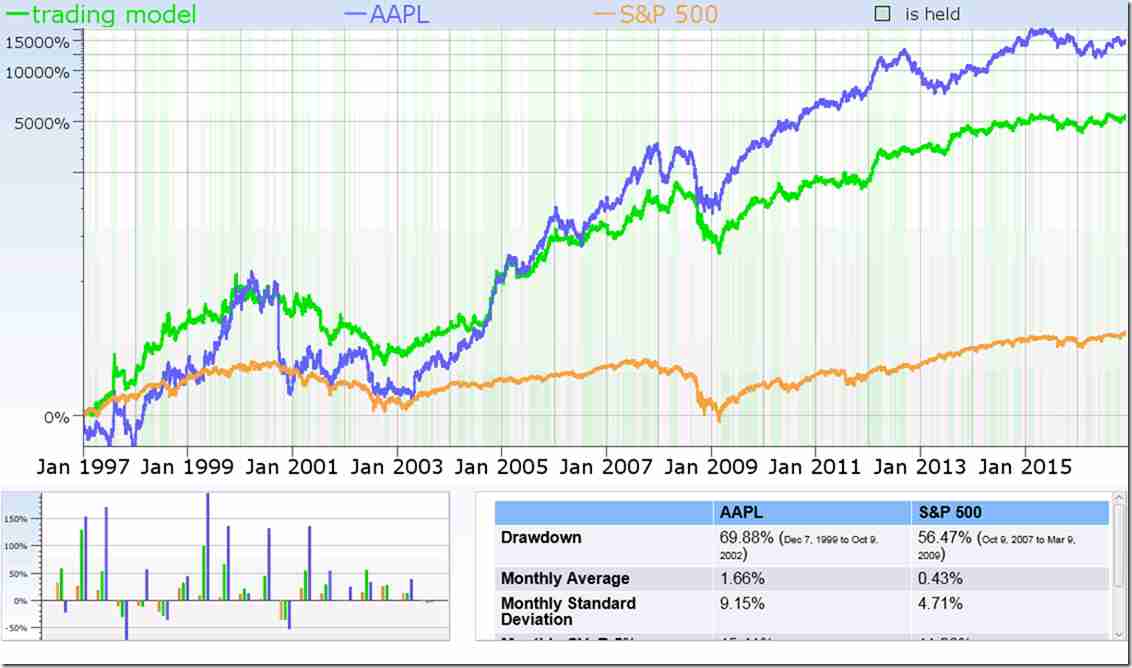 This is interesting, but we clearly miss out on the sections of the trends because of all of our trading.  The Sharpe Ratio beats buy and hold of AAPL, for what it’s worth (0.18 vs 0.16).  One thing to notice is that we don’t go to cash when we exit AAPL; we go to SPY instead.  If we change that we get the following chart, which is much less impressive.  Holding cash is expensive! 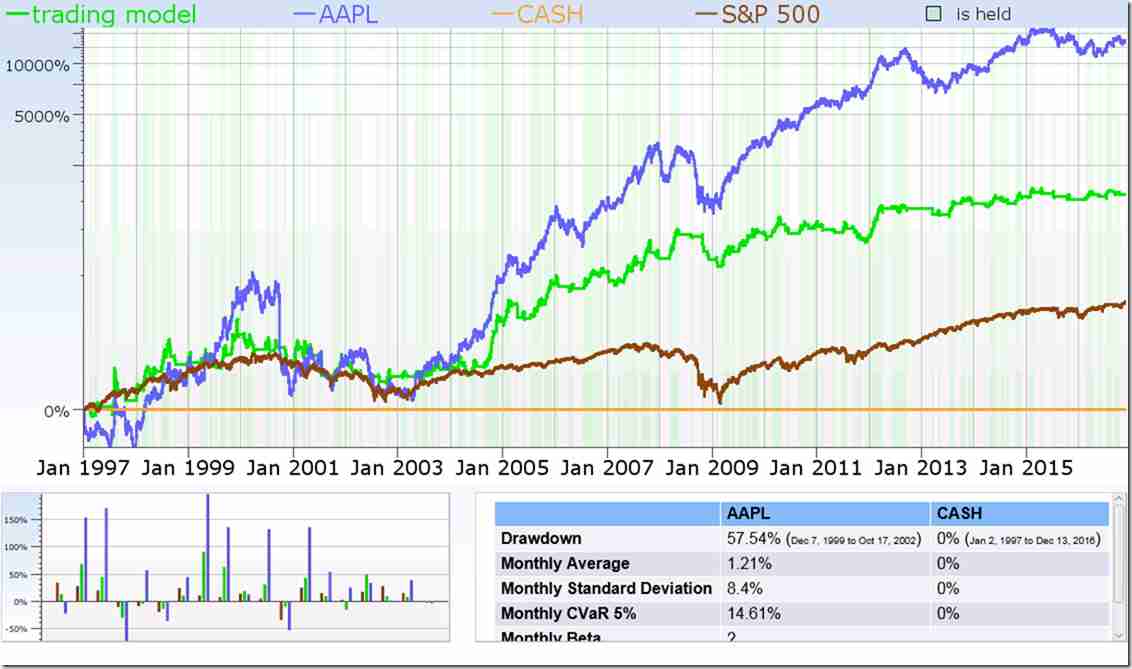 We now turn to Bank of America. 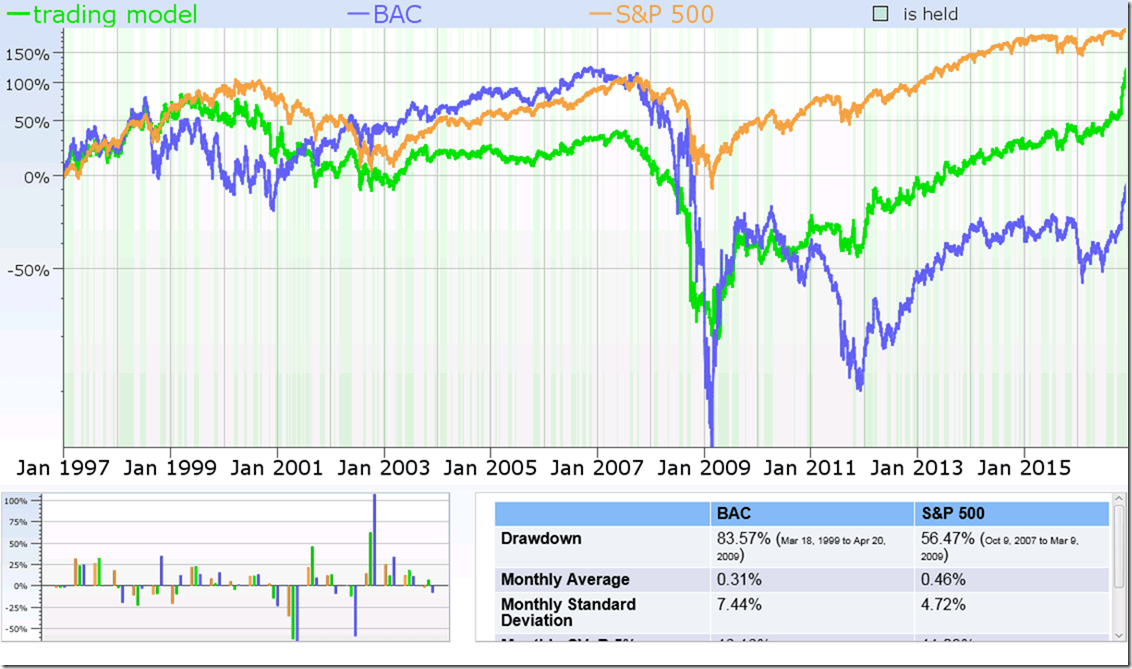 While the results are on an absolute level are not as impressive, we see that trend following allowed us to make money on BAC, while the buy and hold eked out a small loss.  Just for grins, we check out the effect of switching to cash rather than SPY: 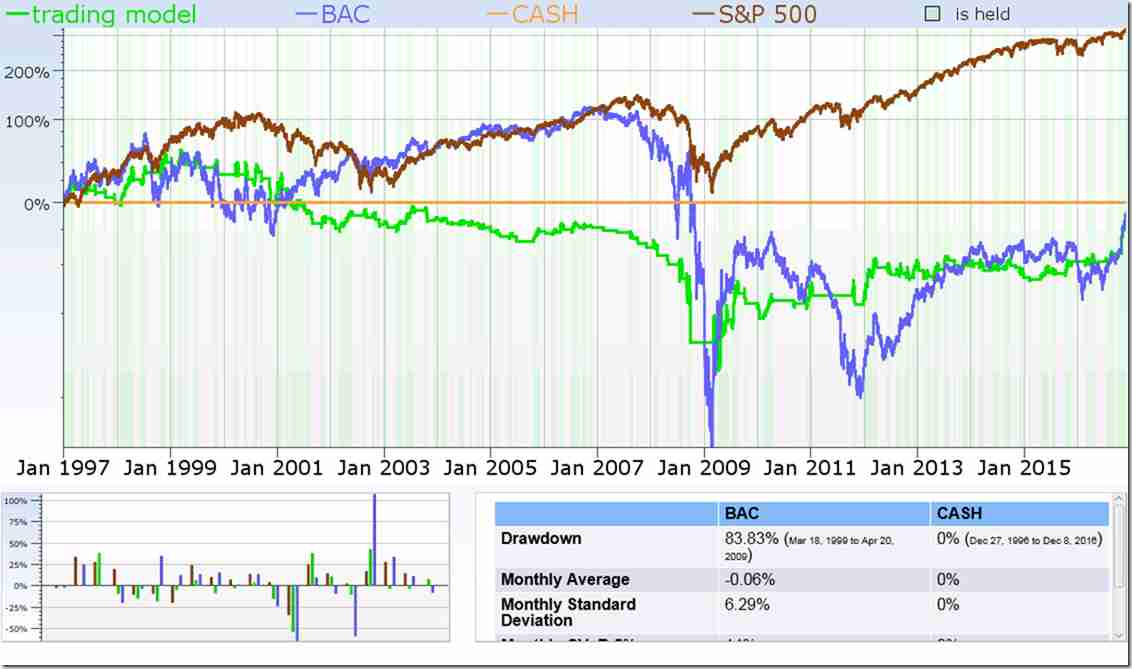 That’s certainly a downer:  switching to cash doesn’t seem to work, as the cost is just too high.

Let me summarize the results for UMPQ:  we did not win.  Using cash as a safe harbor actually clarifies the resuts, as we see that we manage to catch more down moves than up moves.

This is going to be interesting, because we have to not get creamed by the stock.  As will be clear in the chart below, the main task is getting out with any money intact.  The stock loses more than 99.9%.  How do we do?

We escaped with 75% of our portfolio.  Since we are using SPY as our alternate, this clearly meant we got a few of the down moves, but not all of them.  Let us see how much worse we did with cash as our alternate.

We did much, much worse, as it turns out.  Losing 25% in a position is unlikely to damage the whole portfolio too badly.  A 63% loss will have more of an impact.

For our final charts, we bring you ADRNY.  We see that both ADRNY and the trading model both underperform.

Changing the alternate to cash, we see it get even worse: 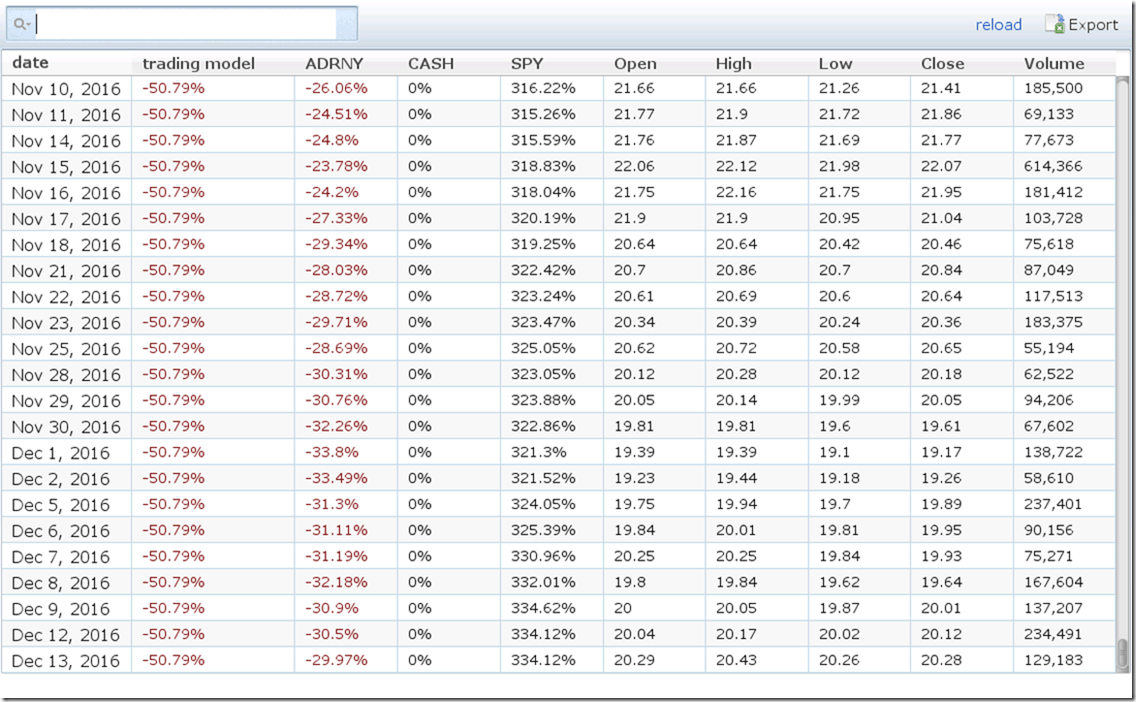 Not good.  Not good at all.  We could give up here, but I’d like to understand why it isn’t working.  That would let us do better, and maybe learn something about the market in the process.

What is going on here? 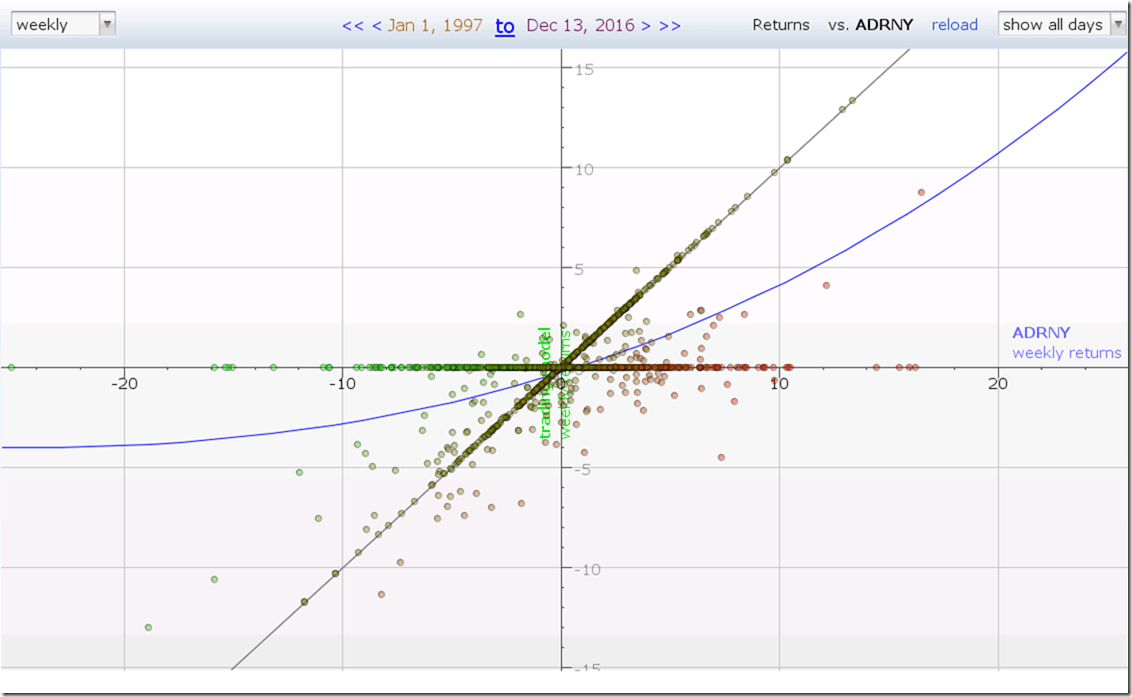 We use a results tilt chart to see what is going on timewise.  This chart is simpler than it looks.  We take each week, and plot it on the chart.  Where do we plot these weeks.  Imagine the chart has a grid that goes from 15% weekly performance to –15% for the strategy, going up and down.  The top is 15%, and the bottom is –15%.  Similarly, we have a horizontal line going from –30% ADRNY performance to 30% ADRNY performance.  If the strategy earns –15% and ADRNY earns 30% we’ll put that dot in the lower right corner.  That’s not too likely (unless this is a short strategy, which this isn’t).

Most of the dots end up along a diagonal line.  They represent weeks where they were in ADRNY the whole time.  Also common are the weeks along the x axis, where we were in cash.  The stray dots not along those two lines represent the weeks that we bought or sold within.  The blue line maps out a cubic regression line – a line tries to curve fit the weeks to a trend with a limited amount of wiggle room.  We see that our trading underperformed, when ADRNY went up, and outperformed when ADRNY went down.  Worse, is that we see lots of dots in the lower right quadrant, where ADRNY went up and we went down.  The market head faked our trading model there.  We have very few dots in the upper left corner, where we head faked the market.  We tried the slower Simplified S2 and got pretty much the same results.

What have we learned?