How Effective are Red Flags in Investing

Stocks That Have Always Gone Down

When investing, for every fairy tale stock like an Amazon(AMZN) or Nvidia(NVDA), there’s an equally disastrous stock like MoSys(MOSY) or Gevo (GEVO). To avoid getting into stocks like these, it’s important to look at their failures and analyze them to avoid getting into the next potential train wreck of a stock

When investing, for every fairy tale stock like an Amazon(AMZN) or Nvidia(NVDA), there’s an equally disastrous stock like MoSys(MOSY) or Gevo (GEVO). To avoid getting into stocks like these, it’s important to look at their failures and analyze them to avoid getting into the next potential train wreck of a stock.  Let’s screen for some stocks that have always gone down.

For this screener we used the equation [always ((change of close over 252 days) < 0 ) within 752 days)] To simplify that equation, it basically means “screen for stocks that have consistently declined every year for 3 years. Only 7 results were shown, so let’s take a look at a couple of these companies’ history and see where it all went wrong for them. 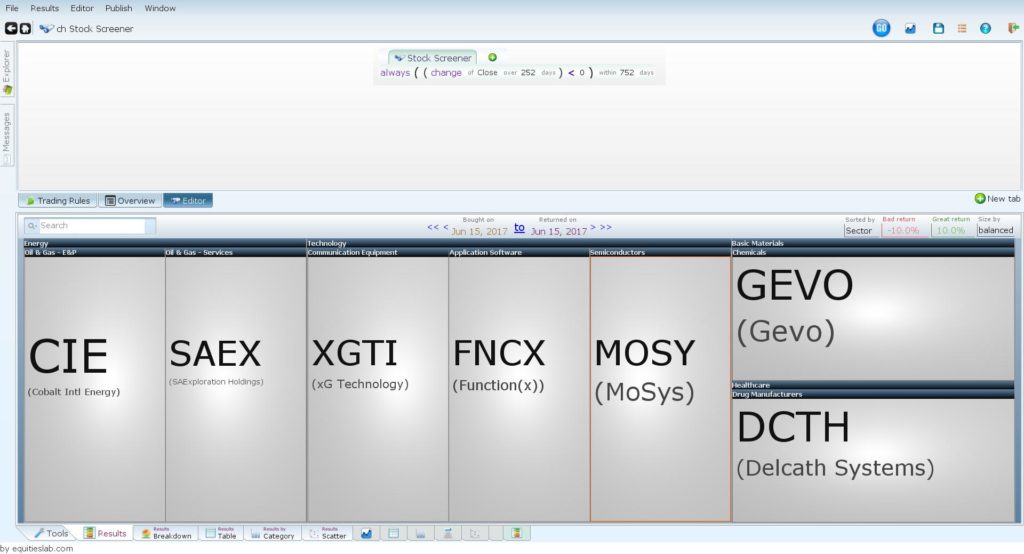 Let’s start with Gevo, a biofuel company. Biofuels are neat in my opinion. Biofuel companies find ways to generate energy directly out of living matter, such as foods, plants, etc. Now that sounds pretty awesome when you think about all the food that goes to waste when it could instead be converted into energy. However, biofuels are not very economical. It requires an extremely large amount of food waste to produce only a minuscule amount of biofuel. According to the World Resources Institute (WRI) providing just 10% of the world’s liquid transportation fuel in the year, 2050 would necessitate nearly 30% of all the energy in a year’s worth of crops the world produces today. So, while this company sounds like it could change the world with this technology, through just a bit of research you can see that it is a very small possible market share in the notoriously competitive energy sector. As you can see in the chart below Gevo (GEVO) has had quite a bumpy ride since the IPO, generating some initial excitement about the potential of the industry only to get crushed by reality.

Another poor performing company that showed up in the screener was Delcath Systems (DCTH). Delcatch Systems is an interventional oncology company, focuses on the treatment of primary and metastatic liver cancers. The company is developing melphalan hydrochloride for Injection for use with the Delcath hepatic delivery system to administer high-dose chemotherapy to the liver. Liver cancer happens to be the 5th most common type of cancer for men, and the 8th most common type of cancer for women. While it sounds like this company should be able to turn an easy profit, biotech companies such as DCTH must spend loads of cash on the development of their drug while also competing against other larger firms aiming to cure the same disease. Biotech stocks usually spike when they get FDA approval which is a long 3 step process. Getting past the first or second phase of FDA approval can cause a spike, but by no means does it guarantee full FDA approval. When you take a look at this stock’s chart below, you can see things going from good to bad all too quickly.

This stock lost 99.98% of its value from March 7th, 2014 – June 2nd, 2017, which is just about the equivalent of setting a pile of cash of fire. It is always important to look at companies such as these to see if you can score a deal with a cheap stock that may have potential. In the case of these two stocks we looked at today, I sadly see no promising potential for them as they are both struggling to stay afloat in an extremely competitive market environment.

Let’s take a larger step back and look at how companies that fit this particular screener have performed historically using the Equities Lab backtesting feature. As you can see below the screener is extremely volatile between the beginning of 2009 all the way through mid-2011. The reason for this was that this time was when many companies began to rebound from a financial standpoint after the financial crisis. Around that time frame interest rates were at historical lows so many companies took advantage of this by taking on large amounts of debt, which of course did not always work out in their favor.

The majority of these companies that are found within this screener never up having a miraculous recovery, but Media General (MEG) just happened to be the exception to this trend. As you can see below, Media General began a wild ride in 2009 by skyrocketing up just over 300%, only to fall back down and find its way into negative territory within the next couple of years finding a nice bottom towards the end of 2011. The roller coaster then began again seeing an increase of barely over 600% within the next couple years before being bought out by Nexstar Media Group (NXST) for $4.6 billion. Media General, of course, is a very rare stock and by looking at the backtesting results we can see that the majority of these stocks do not end up rebounding, and when they do they are very volatile. Overall, it is safe to say you shouldn’t waste your time speculating random stocks to have major increases after large declines unless of course you look into the fundamentals of the company and see a hidden value.

In conclusion, looking for the stocks that have taken a beating in hope of a huge rebound is usually a waste of time. There are much better strategies to use for when you’re looking to invest. That is why backtesting is vital when looking at any potential investment, and Equities Lab allows you to do that and much more.